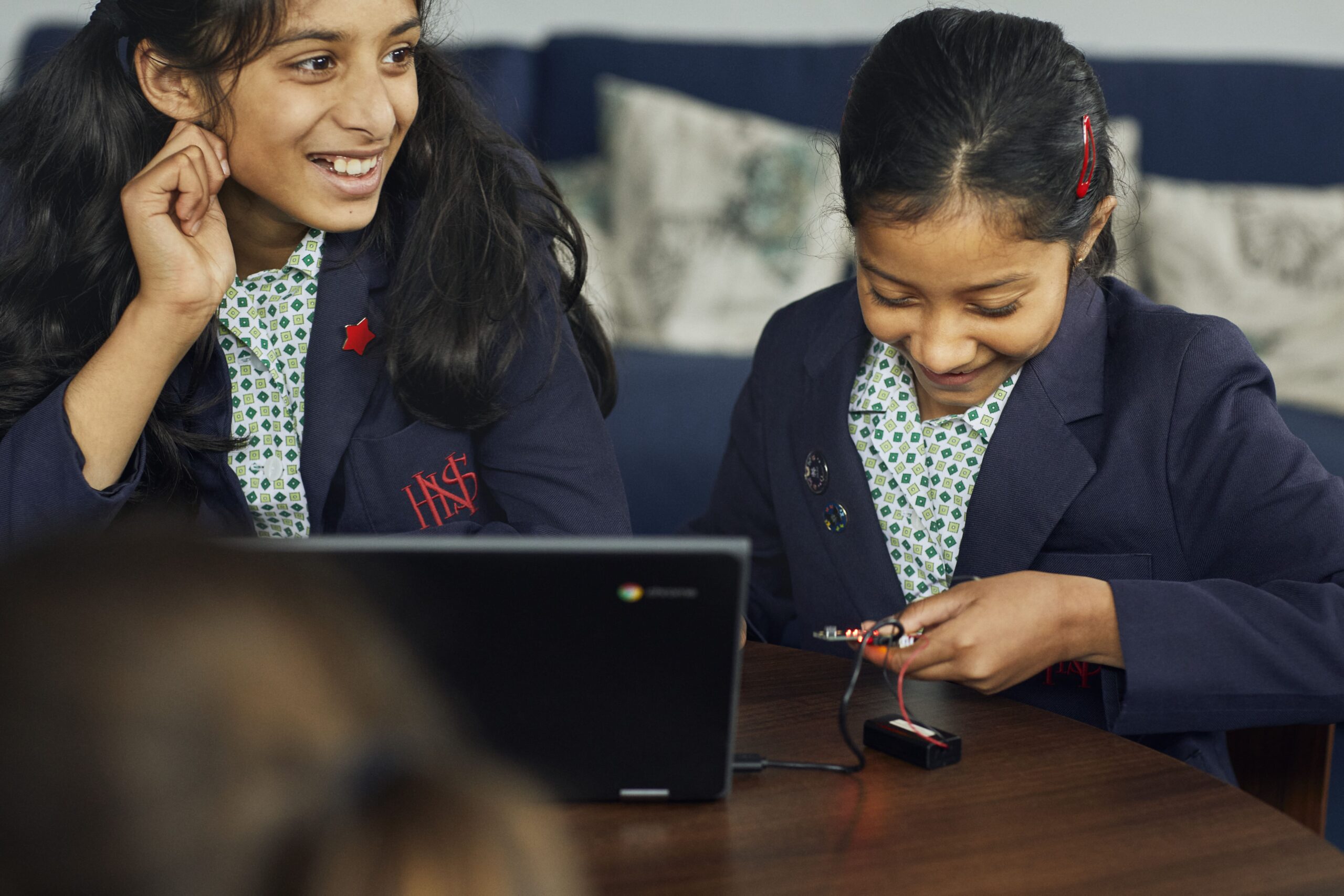 Come and see why we are the best place for your daughter.

Register for our Open Morning on Saturday 1st October.

Reflections from the International Coalition of Girls Schools Global Forum 2022

Mr Matthew Bradshaw, Head of History and Politics, reflects on his attendance at the IGCS Global Forum in Boston, USA.

On the 24th of June I embarked from Norwich Airport on a very strange experience from a teacher perspective. A trip, but without a single student in tow. This lone visit was one of several from GDST schools across the UK to Boston, Massachusetts to join the International Coalition of Girls Schools (IGCS) Global Forum III. I arrived at the conference two days early, but not for sightseeing. In September of 2021 I made an application to the IGCS Global Action Research Collaborative (GARC) a two-year programme where Action Researchers from across the globe come together to train, share experiences and research on key aspects of educational change and development. The theme for my current research group is: The Global Reset: New Opportunities for Educating Girls.

“In short, how might we leverage what we have learnt from the pandemic to make greater gains for girls’ education going forward?”

When I learnt of my successful application in October of 2021 I was very excited. Serendipitously Miss Sefton in the summer of 2021 had laid down the challenge of taking a lead on a Future Schools Programme and I had made a successful application to lead this initiative. Whilst this year has been a challenging time to begin this programme, I have not been resting. With regular homework, training online videos and reading to complete I was back again being a student, this time of Action Research. Every couple of weeks this was augmented by online training carefully scheduled at such a time that colleagues from Australia to Argentina or South Africa to Scotland could all participate at once. In some of these sessions I met with the whole research group of around 40 delegates and at other times with my smaller group of around eight delegates: three Australians, two Brits, two Americans and a Bermudan. These meetings occurred for me at 9pm which was sometimes quite a commitment, but for the Aussies being lucid at 5am was even more demanding. The reason for my early arrival in Boston was that we were going to meet “in person” for two days of training.

As someone who had done all their dating before “online” was such a thing, the idea of meeting and getting to know people online before meeting “in person” was very alien. Yet it was so exciting to have built professional relationships on-screen and this made meeting up in-person an even more precious experience. For the previous cohort of researchers they had been forced to wait two years for this meeting as last year’s Global Forum was held entirely in the virtual sphere. We therefore felt very privileged to be meeting up from across the world at such an interesting and volatile time. I say volatile because my fitful sleep on Friday night after I landed was disturbed by the march of a large group of Bostonians against that day’s US Supreme Court verdict striking down Roe vs. Wade; a judgement which, for many at the conference, signalled a hugely retrograde step in the rights of women in the United States. The precarious position of women’s rights across the globe was further reflected in the opening keynote conversation from Shabana Basij-Rasikh the Co-founder and President of the School of Leadership, Afghanistan. A school which, since the return of Afghanistan to Taliban rule, has been forced to relocate to Rwanda in order to continue to educate the girls present there; none of whom are allowed to return home. Themes more analogous to the UK were identified in the final keynote address from Dr. Paula A. Johnson, President off Wellesley College which addressed the crucial battle for the representation of the female sex in medical research and the mental health crisis left as a legacy of the pandemic.

“It was this ‘Global Perspective’ which was the biggest learning from both the conference and the training experiences.”

There were so many interesting moments of connection as we spoke of our experiences as educators across continents and cultures. Students are of course fundamentally very similar wherever they happen to be born. The cultures of their nations and their educational systems are not. It is here, it seems to me, that there is great cause for optimism. As people talk across the globe and realise what connects them a world of possibilities arise. This was aptly demonstrated by a keynote talk from Leymah Gbowee, Nobel Peace Laureate who spoke of her fourteen year struggle with other women to bring to an end the civil-war in Liberia. Leymah is not a conventional politician and unashamedly advocated for being an authentic leader; which in her case involved being robust, direct and with no desire for personal acclaim. Her point was not that we try to win Nobel Peace Prizes, but that the Global Perspective starts with being a good citizen where we are, and when nobody’s looking. In our school’s new ‘ACTIVE’ learning approach, which has deliberately tailored to our school context the 2040 World Economic Forum (WEF) Schools of the Future report and the Organisation for Economic Cooperation and Developments’ (OECD) ‘Global Perspectives’ approach, we have called this being “Community-minded”.

My return to Norwich was massively delayed by the ongoing pangs of the pandemic on international air travel. More or less the moment I set foot back in my house I tested positive for COVID for the very first time causing me to sadly miss the final week of this school year. These were ready reminders that great challenges still remain in the world around us. But nothing could dim my enthusiasm for the research project ahead in our small corner of the world. What could be more exciting than researching how at Norwich High we can uniquely develop Growth Mindsets, Lifelong Learning Dispositions and Global Perspectives through encouraging students to be ‘ACTIVE’ learners? Next year I will be presenting the outcomes of my research in Cleveland, Ohio to an international audience, as Miss Sefton did this year by presenting with other GDST heads on overcoming self-limiting beliefs. We are both keen to make sure that Norwich is well and truly “on the map” as a place where, in the good old Norfolk saying, we “do different”. I can do this safely in the knowledge that I am being supported not just by Miss Sefton, Mr Braybrook and my colleagues at Norwich High but by the GDST who now support a network of Action Researchers; the Global Action Research Collaborative and an international network of girls schools (ICGS).

“My hope is that these global connections soon echo in our corridors and classrooms with students aware of a world of challenges, connections and possibilities.”

Our students have a vital role to play as continuing agents of positive change for themselves and their community. Norwich High School was formed nearly 150 years ago with a mission to combat systemic disadvantage, our students’ contribution to ‘paying this forward’ will be crucial when everyone is looking and, even more, when nobody is.

At the end of the trip, in the short amount of time I had before my departure I visited the JFK memorial library in Boston, I am a History teacher after all! Being there reminded me of a famous story of when President Kennedy visited NASA in 1962 which reinforced a great deal of what I had learnt at the ICGS Conference. During his tour of the facility, President Kennedy met a janitor who was carrying a broom down the hallway. The President then casually asked the janitor what he did for NASA, and the janitor replied, “I’m helping put a man on the moon.”

Find out more about our Senior School

This website uses cookies to improve your experience while you navigate through the website. Out of these, the cookies that are categorized as necessary are stored on your browser as they are essential for the working of basic functionalities of the website. We also use third-party cookies that help us analyze and understand how you use this website. These cookies will be stored in your browser only with your consent. You also have the option to opt-out of these cookies. But opting out of some of these cookies may affect your browsing experience.
Necessary Always Enabled
Necessary cookies are absolutely essential for the website to function properly. These cookies ensure basic functionalities and security features of the website, anonymously.
Functional
Functional cookies help to perform certain functionalities like sharing the content of the website on social media platforms, collect feedbacks, and other third-party features.
Performance
Performance cookies are used to understand and analyze the key performance indexes of the website which helps in delivering a better user experience for the visitors.
Analytics
Analytical cookies are used to understand how visitors interact with the website. These cookies help provide information on metrics the number of visitors, bounce rate, traffic source, etc.
Advertisement
Advertisement cookies are used to provide visitors with relevant ads and marketing campaigns. These cookies track visitors across websites and collect information to provide customized ads.
Others
Other uncategorized cookies are those that are being analyzed and have not been classified into a category as yet.
SAVE & ACCEPT